H. Slit-lamp Close inspection of the anterior eye structures and ocular adnexa are often done with a slit lamp machine. A small beam of light that can be varied in width, height, incident angle, orientation and color, is passed over the eye. Often this light beam is narrowed into a vertical slit, during slit lamp examination. The examiner views the illuminated ocular structures, through an optical system that magnifies the image of the eye.

This allows inspection of all the ocular media, from cornea to vitreous, plus magnified view of eyelids, and other external ocular related structures. Fluorescein staining before slit lamp examination may reveal corneal abrasions or herpes simplex infection. The binocular slit-lamp examination provides stereoscopic magnified view of the eye structures in striking detail, enabling exact anatomical diagnoses to be made for a variety of eye conditions. 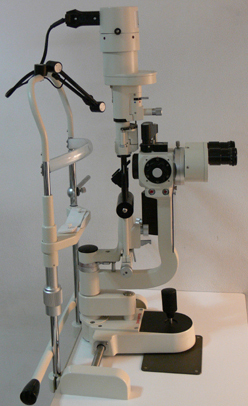 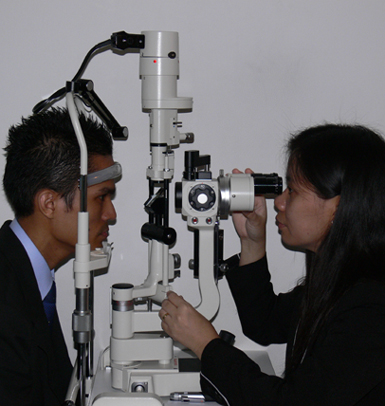 I. Amsler grid, used since 1945, is a grid of horizontal and vertical lines used to monitor a person's central visual field. The grid was developed by Marc Amsler, a Swiss ophthalmologist. It is a diagnostic tool that aids in the detection of visual disturbances caused by changes in the retina, particularly the macula (e.g. macular degeneration), as well as the optic nerve and the visual pathway to the brain. In the test, the person looks with each eye separately at the small dot in the center of the grid. Patients with macular disease may see wavy lines or some lines may be missing.

Amsler grids can be obtained from an ophthalmologists or optometrists and may be used to test one's vision at home. The original Amsler grid was black and white. A color version with a blue and yellow grid is more sensitive and can be used to test for a wide variety of visual pathway abnormalities, including those associated with the retina, the optic nerve, and the pituitary gland. 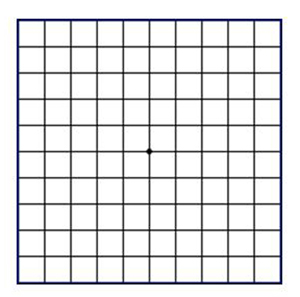 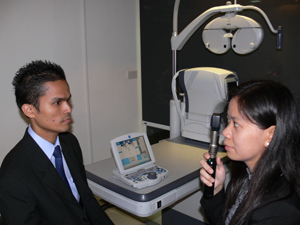 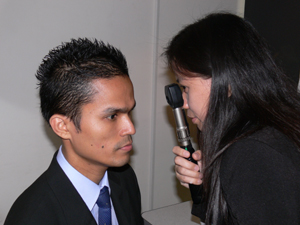 Retinoscopy is particularly useful in prescribing corrective lenses for patients who are unable to undergo a subjective refraction that requires a judgment and response from the patient (such as children or those with severe intellectual disabilities or communication problems). In most tests however, it is used as a basis for further refinement by subjective refraction. It is also used to evaluate accommodative ability of the eye and detect latent hyperopia. 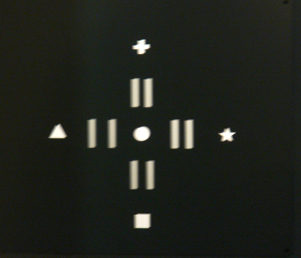 Eye dominance When each eye has its own image of objects, it becomes impossible to align images outside of Panum's fusional area with an image inside the area. This happens when one has to point to a distant object with one's finger. When one looks at one's fingertip, it is single but there are two images of the distant object. When one looks at the distant object it is single but there are two images of one's fingertip. To point successfully, one of the double images has to take precedence and one be ignored or suppressed (eye dominance). The eye of the image that takes precedence is called the dominant eye.

The Worth 4 dot test, also known as the Worth Lights test, is a clinical test for suppression of either the right or left eye. Suppression occurs during binocular vision when the brain does not process the information received from either of the eyes. This is a common adaptation to strabismus, amblyopia and aniseikonia.

During the Worth 4 dot test, the patient, wears anaglyphic glasses (with one red lens over one eye, usually the right, and one green lens over the other eye, usually the left). The patient is shown a modified flashlight (torch) with four holes, approximately 1cm in diameter, organized in a diamond shape. Traditionally, the holes are arranged with the top hole showing only red light, the left and right showing only green light, and the bottom showing white light.

Because the red filter blocks the green light and the green filter blocks the red light, it is possible to determine if the patient is using both eyes simultaneously in a coordinated manner. With both eyes open, a patient with normal binocular vision will appreciate four lights. If the patient either closes or suppresses an eye they will see either two or three lights. If the patient does not fuse the images of the two eyes, they will see five lights. The testing distance can be varied to assess the size the area of suppression of the patient's visual field. If the flashlight is held at 16 inches (40cm), the lights appear larger and tests for a large area of suppression. If the flashlight is held at a greater distance (traditionally 10 feet or 3 meters), a smaller area is tested. 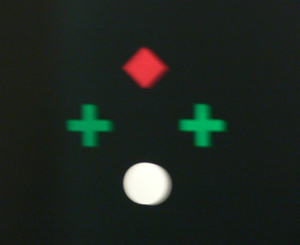 A cover test is an objective determination of the presence and amount of ocular deviation. It is typically performed by orthoptists, ophthalmologist, and optometrists during eye examinations.

The two primary types of cover tests are the alternating cover test and the unilateral cover test (cover-uncover test). The test involves having the child (typically) focusing on a near object. A cover is placed over an eye for a short moment then removed while observing both eyes for movement. The "lazy eye" will wander inwards or outwards, as it begins to favor its perceptive visual preference. The process is repeated on both eyes and then with the child focusing on a distant objects.

The cover test is used to determine both the type of ocular deviation and measure the amount of deviation. The two primary types of ocular deviations are the tropia, also known as Strabismus, and the phoria. A tropia is a constant misalignment of the visual axes of the two eyes, i.e. they can't point the same direction. A phoria is a latent deviation that only appears when fixation is broken and the two eyes are no longer looking at the same object.

The unilateral cover test is used to determine whether the deviation is a phoria or tropia, and the alternating cover test then used to measure the amount of deviation, usually with the aid of loose prisms. 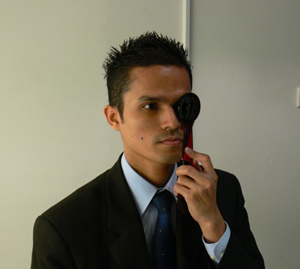 To maintain stereopsis and singleness of vision, the eyes need to be pointed accurately. The position of each eye in its orbit is controlled by six extra ocular muscles. Slight differences in the length or insertion position or strength of the same muscles in the two eyes can lead to a tendency for one eye to drift to a different position in its orbit from the other, especially when one is tired. This is known as phoria. One way to reveal it is with the cover-uncover test. To do this test, look at a cooperative person's eyes. Cover one eye of that person with a card. Have the person look at your finger tip. Move the finger around; this is to break the reflex that normally holds a covered eye in the correct vergence position. Hold your finger steady and then uncover the person's eye. Look at the uncovered eye. You may see it flick quickly from being wall-eyed or cross-eyed to its correct position. If the uncovered eye moved from out to in, the person has exophoria. If it moved from in to out, the person has esophoria. If the eye did not move at all, the person has orthophoria. Most people have some amount of exophoria or esophoria; it is quite normal. If the uncovered eye also moved vertically, the person has hyperphoria (if the eye moved from up to down) or hypophoria (if the eye moved from down to up). Such vertical phorias are quite rare. It is also possible for the covered eye to rotate in its orbit. Such cyclophorias cannot be seen with the cover-uncover test; they are rarer than vertical phorias. During the cover-uncover test, a person with some phoria will notice a brief episode of double vision or diplopia after uncovering the eye. This is a normal consequence of the eye's being briefly misaligned. If the diplopia is enduring, that is considered a disorder.

The cover-uncover test can also be used for more problematic disorders of binocular vision, the tropias. In the cover part of the test, the examiner looks at the first eye as he or she covers the second. If the eye moves from out to in, the person has exotropia. If it moved from in to out, the person has esotropia. People with exotropia or esotropia are wall-eyed or cross-eyed respectively. These are forms of strabismus with amblyopia. When the covered eye is the non-amblyopic eye, the amblyopic eye suddenly becomes the person's only means of seeing. The strabismus is revealed by the movement of that eye to fixate on the examiner's finger. There are also vertical tropias (hypertropia and hypotropia) and cyclotropias.